In our continued effort to test the limits of Cindy’s little Honda Civic, which has seen several thousands of miles over the past year, we ventured eastward from our home base to the far foothills of the Adirondacks along the Vermont border. Specifically the area of Glens Falls, Lake George and Whitehall, NY.

As a fan of the weird with an interest in the fringe field of cryptozoology I recalled reading about a spate of sightings in Whitehall, NY during the 1970’s. These included a multiple witness encounter with a large hairy hominid on Abair Road. It is this sighting that put Whitehall on the cryptozoological map, and on my list of places to visit if I ever have the chance.

During some pre-trip research I discovered a few fun Bigfoot-related locations to stop by just for photo ops, and some beer-related stops as well. Stay tuned for the beer, we’ll walk through some quirky Bigfoot encounters first.

To be sure, the History of Whitehall holds much more than Bigfoot sightings. Settled in 1759 as Skenesboro, founded by British Army Captain Philip Skene, the town is considered the birth place of the U.S. Navy. During the Revolutionary war Skene’s trading schooner was captured and Benedict Arnold used the area to build ships for battling British forces on Lake Champlain.

Ships were also built in Whitehall harbor for service in the U.S. Navy during the War of 1812. You can learn more about the non-squatch history of Whitehall at the Whitehall Chamber of Commerce website.

The main goal of Cryptobrewology’s Road Trips and Brew Pubs is finding roadside weirdness and beer, and like many other areas of the nation witnessing a boom in craft breweries this particular section of the Adirondacks has no shortage of suds and strangeness, unfortunately no breweries call Whitehall home, unless maybe in somebody’s garage. There is however the Sasquatch Saloon.

The Sasquatch Saloon was closed the day we drove by but we did get a picture, and made the rounds of other Bigfootery in the area, such as the eight-ish foot tall wood carving near the Skenesborough Museum. It’s not the easiest thing to carve a log with a chainsaw so on that merit this thing is kinda cool but the creature depicted is really only about six feet tall because the sculpture includes a twenty inch base. Also it appears that the work may have started out as a bear because it has bear claws, but the face looks like an old guy. So, hey… Bigfoot!

It’s a roadside oddity for sure, and worth a stop because it’s near the massive timber remains of the hull of the 1814 Navy schooner USS Ticonderoga. Now that’s something to see. During our stop we were all alone at the site, which lies along the banks of the Lake Champlain Canal, and it was humbling to see that historic old form which was once a war vessel. Whitehall has an intriguing history indeed.

Another Bigfoot sighting we had in the area was the mishmash metal fabrication outside of Bigfoot Wine and Liquors (a/k/a Joe’s Pizza) which sports a rather goofy posture with it’s head jutted forward and left arm raised high overhead. It’s in this position because originally it held the store sign which now sits adjacent on a proper sign pole. I wonder why they moved the sign? Maybe Bigfoot wasn’t “to code” for storefront signage.

The best Bigfoot sighting in Whitehall is the massive metal sculpture standing roadside at the Vermont Marble Granite Slate and Soapstone Co. That’s a mouthful of a company name but the Bigfoot sculpture is something to see. Gazing solemnly toward Skene Mountain, the rusty colored hulking form seems to contemplate life’s deeper questions as it guards the parking area. Originally started as a pet project by Hampton, NY based metal fabrication artist Steven Mestyan of Skelabar Studios, the Bigfoot sculpture was purchased by Paul Thompson, owner of the Vermont … Soapstone Co., after he saw the work-in-progress at Mestyans garage studio. 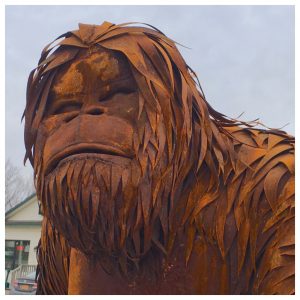 After a long drive on Abair Road, which has some very pretty scenery, we spotted no real Bigfoot so we headed back to Glens Falls for the beer segment of our trip.

I’ll go through my list of honorable mentions in a bit but hands down the best beer we found in the area was produced by Battle Hill Brewing Company in the little town of Fort Ann, NY, which lies midway between Whitehall and Glens Falls, on Route 4. Officially a farm brewery, Battle Hill Brewing is only about two years young as of this writing, and for a such a young brewery they have their stuff together. They offer some of the most unique and flavorful beers I’ve tasted from a small farm brewery. 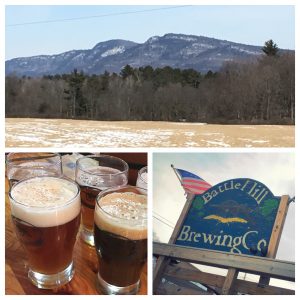 Another good stop for beer aficionados is Mean Max Brew Works in Glens Falls, NY. Cindy and I had a flight there during their trivia night, must have been a Wednesday. Great tasting brews and a cool atmosphere. The town itself is pretty neat too.

If you happen to be in the area, either to look for Bigfoot or for some other reason, check out Fenimore’s Pub at the Queensbury Hotel. Cool place to lounge and enjoy a nice dinner. Plus they have some great local beers on draft you can check out if you are unable to visit the actual breweries. Bartender, Ian, was very friendly and knowledgable about the local breweries.

One example is Paradox Brewing in Schroon Lake, NY, about 40 minutes north of Glens Falls. We didn’t have time to visit them directly but glad we were able to sample one of their beers. Good stuff. They’re on our list for the next time we’re in the area.

Other breweries in that general area that deserve an honorable mention are Common Roots Brewing in Glens Falls. And Cooper’s Cave is not near the brewery no matter what your GPS tells you, it’s back near the bridge by Cooper’s Cave park. It’s not really even a cave anymore either. I followed the signs but can’t be sure that I even saw it myself! Good luck. 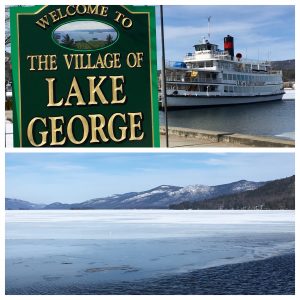 Lake George is beyond beautiful any time of year, and magical even if it’s still covered with ice, so take a drive along the shores and stop by the Adirondack Brewery. If you’re there during the on-season there are a ton of things to see and do. Mini golf, canoeing, restaurants and shops, plus Dr. Morbid’s Haunted House. Lots’ of history at Lake George as well.

You can also swing by The Lake George Brew House just down the street from Six Flags Great Escape amusement park in Queensbury, NY. The brewery serves as a contract brewer for smaller companies who are looking for wider distribution. Brands they offer on tap are Cooperstown Brewing, Davidson Brothers Brewing, Harlem Brewing Co., and The Winner’s Circle. This year they’ll be producing a new selection of beers from a brand called Northway Brewing Company.

There is so much to explore, so much to see and do in this area of the Adirondacks that you can’t possibly fit it all into a two day visit. Unfortunately that’s pretty much all the time we had. We checked some things off of our list there though, so we can focus on a nearby area the next time we’re in town. Share your favorite spots or anything I may have missed in the comments below. And happy Road Tripping!

Watch Road Trips and Brewpubs on our YouTube Channel for a video of this and other places we’ve been!