Just back from a little trip to Cape May, NJ. We hitched up the trusty Road Trips and Brew Pubs travel trailer and headed east from our home in West Chester, PA, for the sole purpose of an evening at The Brown Room at Congress Hall to listen to a friend play piano, and to check out the Cape May Brewing Company. More on the piano man in a bit, first our feature story…

Cape May Brewing Co.
This is a pretty inspiring brewery, with some pretty damn good beers.

Cape May Brewing Company began as a very small microbrewery, one might say nano-brewery, when they fired up a 12 gallon brewing system in 2011 and delivered their first keg of IPA to their first customer, Cabanas Beach Bar & Grill, over the fourth of July weekend that year.

Four short years later they stepped up their game with a new 30 barrel system. But that growth doesn’t mean they’ve lost their focus or vision. Cape May Brewing Company has succeeded in what they set out to accomplish, “to provide South Jersey with fresh, delicious, local beer and help put New Jersey on the map as a craft beer state.”

They have some pretty awesome beers on tap at Cape May Brewing, no joke. For ten bucks — as of this writing — you get 8 four ounce samples. My favorite was the Devil’s Reach, a very flavorful Belgian Style strong ale. Among the other samples we had were Cape May IPA, Take Five Session IPA, Poverty Beach Belgian IPA, Concrete Ship Russian Imperial Stout (pure awesomeness!), Coastal Evacuation Double IPA, Honey Porter and their Blonde Ale that they can’t call a Kölsch.

As a production brewery Cape May Brewing Co is not permitted to just sell beer like a bar, so upon entering you will be made aware that you need to either take the guided tour or do your own self-guided tour before you can have any beer.

If you know how beer is made and understand what a grain hopper, mash tun, boil kettle and fermenters are save yourself the time and just do the self-guided tour, you will gain access to the brewery and see all of the same stuff people see on the full tour. Take some pics, grab a laminated self-guided tour card and you’re all set.

Get a growler or two to go and bring them back to your site to enjoy by the campfire with some S’Mores. That’s what we did.

For more info on the Cape May Brewing Company and their ongoing story, visit their website and their official blog Straight To The Pint.

Other Things to do in Cape May
There are a lot of things to see and do in Cape May, NJ, and it’s easy enough to plan a thorough trip if you have a few days. You can even leave some room for relaxing on the beach or at one of the many nearby campgrounds. We stayed at Acorn Campground. Nice place, friendly staff and quiet grounds.

But if you only have day to jam it in you need to pick and choose wisely.

If you happen to be there on a Monday between June 22 and August 31, I highly recommend that you stop in at The Brown Room for a nightcap or two and listen to Erik Hetzel of the Sin Brothers performing on piano. He sings a bunch of great tunes, including excellent renditions of classic hits by Billy Joel and Elton John, the Beatles, Van Morrison, Steely Dan and a bunch of others. He’s an excellent player, and it’s a cool room to hang out in too. 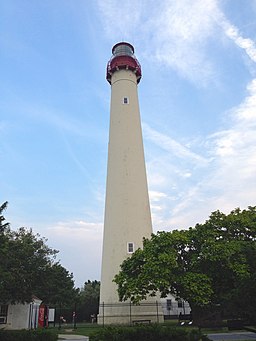 Visit the Cape May Light
The view from the top is well worth climing the 199 steps that spiral up the 157 foot tower. It’s a short climb that pretty much anyone who can walk well enough can handle. Your calves may spasm a little afterwards but that just makes you feel alive, and the experience is well worth that feeling. Roughly five minutes to the top, depending on your fitness level.

The lighthouse is still in use today as a navigational beacon and is the main attraction at the Cape May Point State Park. While you’re there you can grab a an icy or bottle of water and walk around the park enjoying views of the beach, take a hike on one of the three trails, or watch swans and ducks in the freshwater ponds. You may get lucky and spot an osprey.

Around Town, Cape May
If you work up an appetite climbing the lighthouse and strolling the grounds there is no shortage places to grab a nice lunch in Cape May. Finding a parking spot in town can be a little tough, especially on the weekend, but once you find a place to park you are in easy walking distance of numererous restaurants and “beach shacks,” so take your pick.

After lunch you can stick around town for a bit and peruse the shops on Washington Street or spend some time on the beach but if you’re here for the beer, like we were, you can promptly head up to Cape May Brewing Company. Oh, you may want to stop for a wine tasting!

Cape May Wineries
A few wineries dot the cape from Cape May proper all the way up to the airport, near where Cape May Brewing Company is located, so you can stop and take in the beauty of the vineyards and sample some wines on your way to the brewery. But don’t drink to much because you’ll want to save room for some beer samples!

Start at the Willow Creek Winery, then meander northeastward on your way up to the brewing company. You will be able to stop in at Turdo Vineyards and Winery, Cape May Winery, and Hawk Haven Vineyards on your way.

Frescos
A nice evening on the town can include dining at a fine restaurant like Frescos where we enjoyed a wonderful meal before heading over to Congress Hall. It’s BYO so stop for a good bottle of wine first, or bring a growler from Cape May Brewing Co.

Well, that wraps up this post for Road Trips and Brew Pubs. Our next stop is anyone’s guess, but I have a few ideas and we have a few more months before we have to pull the camper off the road for the winter.

See you on the road somewhere! If you see us, honk!

One thought on “Cape May Brewing Company – NJ”

Drinks Well With Others Tee

Great Gifts for Homebrewers, Beer and Wine Lovers in the Cryptobrewology Store!